Wow, here we are.

We flew into Vancouver just over a week ago and quickly discovered it’s a pretty cool place however they do smoke a lot of pot. Anyway, not to hold it against them the city is still absolutely awesome. We were thoroughly looked after and some big Thank-you’s and shout outs go to J-Mac, Alex & Jen and Brodie & Carla. We spent the first few days trying out copious amounts of local coffee and beer, sorting some flight damage to Herbie’s brakes and sourcing a last minute waterproof jacket. Thank-you also to the Arc’teryx sample sale…

After spending a few days in glorious sunshine the weather was meant to turn on Sunday, so obviously that was the day we picked to set off.

We left JMac’s place rather unceremoniously, just about remembering to take a picture and getting funny looks off a guy walking a miniature pug. Initially going in the wrong direction the plan was to head North up the Sunshine Coast then take a ferry from Powell River to Vancouver Island and start the journey South form there. Very quickly two things became apparent:

Beautiful flat coastal roads there are none. Constant up and down is the order of Canada so far. Enough leg burn to stay just on the right side of mega pain and then quickly switching to chin on the handlebars, get as much speed as possible downhill to make it up the other side.

Over here most provincial parks have camping arrangements which are also reasonably cheap for cyclists, our first campsite even included bear boxes in which to store your food at night. Unfortunately the boxes weren’t big enough to store people, otherwise that would have turned into Loz’s bed for the night too. Luckily though we survived night one unharmed and without a bear in sight. Winning.

The other thing about the Canadians so far is just how friendly everyone is. Carrying your life about on a bicycle is a great conversation starter and even within only a few days we’ve met some great people who cycle too and have given us tips of places to go and roads to avoid. Big shout out to Gregg and Mike. Mike if you read this please email us – I’ve misplaced your address sorry!!!

The roads. Ok, I 100% promise this is going to be my only whinge in this whole post. So skip this paragraph if a Loz moan isn’t quite up your street.

Now, are you sitting comfortably……?

In England / Europe we are very lucky. Our county is really old, the roads were initially built for horse and cart and you can get pretty much anywhere by staying on tiny roads. Motorways are a fairly new addition and nobody in their right mind would try to cycle down them – it’s also illegal. Canada isn’t so old and it’s really, really big. The only way to cover a really big distance in really big truck is to build a really big road. Then if you have a really big road, why build a small one? Cycling down that really big road, being overtaken by really big trucks isn’t quite as fun. However, credit to the Canadian’s where it’s due – they are very good at giving cyclists a nice wide berth in their really big trucks. Thank you.

Back to the positives. We’ve been cycling for five days now and I haven’t cried yet. This is huge. Throughout the European warm up I cried daily and with the exception of four days spent with Luke the Aussie, Herb and I argued daily too. So far, so good. After having 260 miles to mull this over so far the only conclusions I can come to is that firstly, directions aren’t really an issue. We tend to be on the same road for 20+ miles so the ‘is this the right way’ conversation isn’t really happening. Secondly, I ‘think’ I am in a very different mindset. I’m not going home in a month, so there’s no point having a tantrum. Oh, and thirdly (I just thought of a third) I know where my limits are. About five hours on a bike are enough, more than six and I start to get cranky. I’m also a lot better at judging when I need a rest and actually taking it, rather than just ploughing on. There really is no point.

So, thats the first few days. Canadians are great, they love cinnamon buns, we haven’t seen any bears, the roads a lumpy yet beautiful and it rains.

Just before I go I’m also going to do a shameless plug. We update our instagram page Pdalling2Patagonia pretty much daily with little pics of what we’re looking at. So if waiting around for a blog post once or twice a week isn’t your bag. Get on instagram 🙂 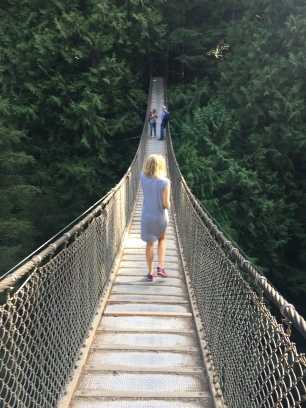 2 thoughts on “Welcome to Canada”