Firstly just to put this bad day into perspective, I’m currently sat at a picnic table having pitched my tent next to a rather beautiful lake, I’ve had a shower, currently cooking food and all my limbs are still attached. I’ll get back to the bad day, but first…… The Olympic Peninsula.

Having had the best possible of starts aside for some rain in Canada, we crossed the border in the USA via a ferry to Port Angeles. Immediately while on our way to the supermarket to stock up on some supplies we bumped into a couple of young lads on heavily laden touring bikes dressed in black jeans and knee high boots.

‘Where are ye heading?’ Herb asked

We stopped post supermarket to meet Jordan and Jack, two brothers from New York, both 20, they’d just started in Vancouver and were heading south. Despite having different route and camping arrangements planned we bumped into them a couple more times over the next few of days. They are really great guys, Jack having only learnt to ride a bike eight months ago and not the first clue about maintenance, however their attitude is outstanding and I have no doubt they’ll make it. They are both 21 in a couple of weeks and one of the early highlights is going to be hopefully meeting up with them and buying them a beer.

Despite only learning thanks to Dr Killick that the Olympic National Forest was in fact a Rainforest a week before we set off it has well and truly lived up to it’s name. Our first night spent under tarp in USA was actually the eve of my 30th birthday and it rained and rained and rained. Luckily we had made it to camp early enough to gather sticks and picnic tables so that we could erected a tarp porch over our tent and have that wonderful camping feeling when you are dry but outside and looking out into the rainstorm. 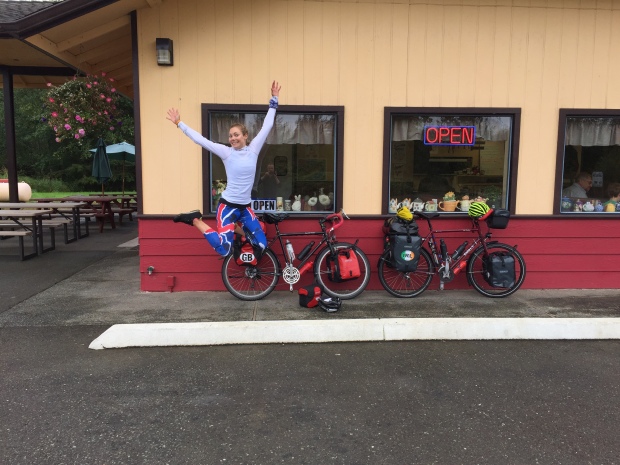 I woke up to become 30 and hastily checked to see if I had any new wrinkles since the day before. I think I’m so far ok, either that or my face was just puffy from camping. The other lucky thing is I don’t look in a mirror too often so ignorance is bliss. We headed to the nearest diner, which is very easy to come across out here and ordered enormous birthday blueberry pancakes. The waitress also suggested we leave our proposed route and instead head up to Lake Crescent. Aside from the route around being mainly a walking trail and having to heave our bikes up rocks and over fallen trees we did in fact find the best swimming spot, where the water was crystal clear, freezing cold and there were three American kids who didn’t look like they got out the house much leaping off rocks and drinking apple sauce.

We ended the day by putting our heads down and legging it to Forks (where the real life vampires from Twilight live) and I was treated to a motel and tacos. If anybody said Herb doesn’t know how to treat a lady well think again.

We spent the next couple of days cycling through enormously tall forests, having the roads mostly to ourselves, camping on the beach and still being a little bit scared abut bears. I’m starting to find my cycling legs and have occasionally found myself getting a little too enthusiastic. One of these such days was yesterday. For some reason I had a good start to the day and was having one of those moments where you’re really enjoying the pain cave – all day. I pushed my little legs and massive bike along for 80 miles, alternatively grimacing and stuffing my face to try and keep it going. At points Herbie was even tired just keeping up although I suspect he’s saying this just to be nice. The result was I finished yesterday absolutely pooped, my legs were sore and i needed about 75 hours sleep.

Of course, today was planned to be a big day too. We forced ourselves up early to be on the road as soon as possible. Upon trying to leave the campsite somebody came to talk to us, usually this is a very welcome distraction but after nearly an hour we were both itching to get on our way. I was in a bad mood and the first thirty miles were uphill.

After getting 40 miles under our belt we stopped for lunch and basked in glorious sunshine. I’d recovered from my early grump and all was ok in the world again. Then we came to leave the town, a really short really steep hill. Now I’ve no idea of gradients but I was in my smallest gear and going so slowly I was wrestling to keep my front wheel straight. Herb was 200m ahead with his mega thighs and then within 30 seconds two really rubbish things happened. Firstly an enormous truck drove exceptionally close to my left elbow. Close enough to make me jump, swear and heart skip a beat all at the same time. Secondly a rather delightful man in a pickup truck started hurling obscene abuse at me. Without having to sensor the next sentence he clearly didn’t not think I should be on the road and was not afraid to voice his opinion. I finally made it to the top of the hill and cried for the first time this trip. What made me and still typing this makes me so angry is that 99.9% of drivers over here are amazing. Logging trucks, camper vans, RV’s, 4×4’s all give us loads of room on the road and don’t make us feel intimidated at all. Yet two people I have never met in my entire life manage to make me feel so small and insignificant within a split second.

I am also particularly sensitive to this as just two years ago almost to the day a friend of mine was tragically killed on her bike while doing a trip not so disimilar to mine. If drivers behind the wheel would just think before they react, I am a person, I have a family, I am sorry if me on the road causes you a 3 second delay on where you are heading, I am not trying to ruin you day on purpose.

So, once again, rant over. I am still having an absolutely blast of a trip so far. Tomorrow we are heading to Seattle to catch up with a uni friend of mine who lives out here and I am very looking forward to a couple of days off the bike to give my little legs some rest.

One thought on “The Olympics and my first bad day.”