While in San Francisco we were lucky enough for Miley and Sheila to agree to put us up. They are self confessed old hippies who did a huge amount of travelling when they were younger. Actually scratch that, they are still pretty awesome at travelling in their sixties. Plus, they are the King and Queen of Folsom and own a Batcar! Loz got the magical mystery Batcar tour of San Francisco, visiting all the sights, getting all the attention but unfortunately not seeing any nakedness in Castro*. After a couple more days they finally sent us on our way armed with a breakfast of sourdough waffles and gifts of peanut butter and twinkies. 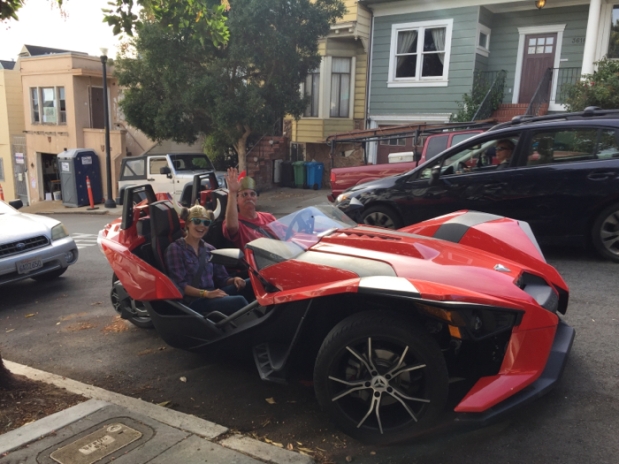 After leaving SF our first port of call was a short day to Half Moon Bay, the cycle was fairly standard apart for some absolutely enormous hills (there is no way I would have accomplished them had I not previously been sat on my arse for 2 days eating ice cream) and I scored a free box of cookies. After waiting outside Safeway nearly an hour for Herbie to reappear, one of the staff members who was unenthusiastically trying to flog some coupons took pity on me and gave me an 800g fresh box of chocolate chip cookies. I say he took pity on me, I think he also didn’t care an ounce about his job and giving away free cookies to smelly cyclists was one way to ‘stick it’ to his boss. Either way, I was delighted, until I had to lug them up the hill.

It was that night in the Half Moon Bay hiker biker site we had our first meeting with ‘anal dentata’ (advisory warning, do not google!) a group of five splendid ladies on a week long bike trip from San Francisco to San Luis Obispo. More about AD (as I’m going to call them for short) to come, however it is worth noting that among AD there was a Herbie, Herbie met a lady Herbie! If that wasn’t enough, we also met Michelle that night too. Michelle being an Irish lady. Irish ladies, Herbie ladies – it was nearly all too much. 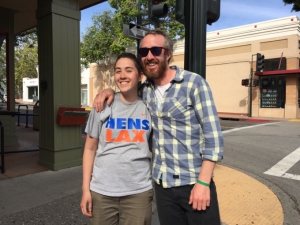 The next night we were back out of our tent again to stay with another of Herbie’s cousins. This time we knew he was in Santa Cruz, rather than just another chance roadside meeting. Billy and his wife Carrie have two absolutely adorable daughters Chloe (6) and Caitlyn (4) who are Star Wars and halloween fanatics. The latter is probably more of a seasonal thing however neither of them were one bit scared by the life-size, talking and light up red eyed Grim Reaper outside their font door. They opened their home to us for two nights and treated us like princesses. We had a great time hanging out with them all. Loz got to practice her hair braiding skills, Herbie got to practice his shoulder riding skills (just to be sure, Herbie carried the girls – even after a 7kg weightloss he is still way too heavy to be lifted by a six year old) and we got treated to even more amazing coffee and ice cream. Santa Cruz and Capitola are ‘really rad’ and we were nearly tempted to even go for a surf, apart from it was really cold, windy and neither of us can surf. Minor details aside we really liked the place and will definitely be back. 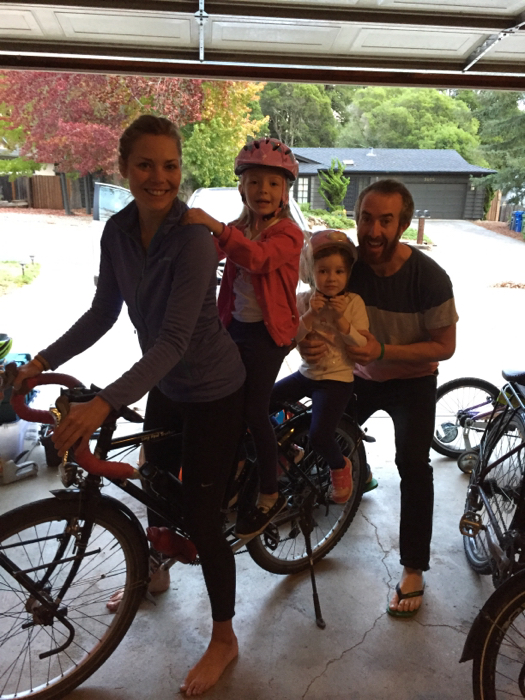 Mounting up again we were now heading into Big Sur country, something we’ve both been looking forward to since way back when. Not least because there is apparently the ‘best breakfast pancakes in the world’ to be found at Deetjens Big Sur Inn. We are both partial to a pancake and had been recommended this place by numerous people. We got up and away early to get some miles under our belt before the feast, after about 30 miles we bumped back into AD, Michelle and Jackie. Jackie we have been leapfrogging with ever since we first met back up in Washington. After a quick stop and chat Herb reminds me / tells me for the first time that Deetjens closes at 12:00 and we still had three miles to go, it was 11:40. I sent Herb off ahead as he’s still way quicker and I followed in hot pursuit, the thought of the worlds best pancakes powering me on. I turn a corner,

and so it went on for approx 1000ft, my breakfast hopes disappearing with every ft elevation gain. Finally I reached the actual summit and started a rapid decent, it was 12:10 and there was still no sign of Deetjens. Another hairpin and I see Herbie perched on the side of the road, I skid to a halt as I realise the look of dejection in his eyes. He arrived five minutes too late and no amount of Irish charm was going to get him even a morsal of pancake, better still the next place to buy food was another twenty miles down the road. I tried to lighten the situation and point out I could make him a peanut butter and honey sandwich at the next beautiful lookout point. It was not good, toys were strewn all across the road and he wasn’t even hungry anyway….. 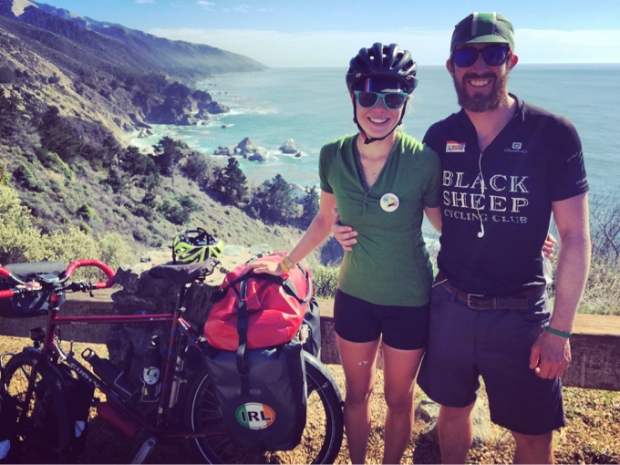 After a couple more miles the beautiful coastline and PB&H sandwich won him over again and Herb was back to his usual self. Still disappointed however, apparently I need to take him back to Deetjens for his 40th. The Big Sur really was spectacular, it’s hard when things are built up so much beforehand, maybe the sunshine and blue skies helped a little bit, but it really is a spectacular coastline. Much better by bike than RV (in my opinion).

The next day finally brought the much promised rain. Native Californians were dancing in the street however soggy European cyclists were grumbling in damp tents. Luckily we once again bumped into AD where we managed to share a campsite and enormous fire. We learnt a lot that evening, sharing stories about what different body parts are called both sides of the pond and learning what not to do with Pop Rocks. Our adventure with the ladies ended in San Luis Obispo (or SLO as the locals call it) and they took much delight in trying to teach us all about American culture. Mainly ‘biscuits and gravy’ a totally weird Americanism where they put some sort of white sauce on scones and eat it for breakfast. I’m not quite sold on the idea however it probably has a lot to answer for with regard to America’s obesity problem. 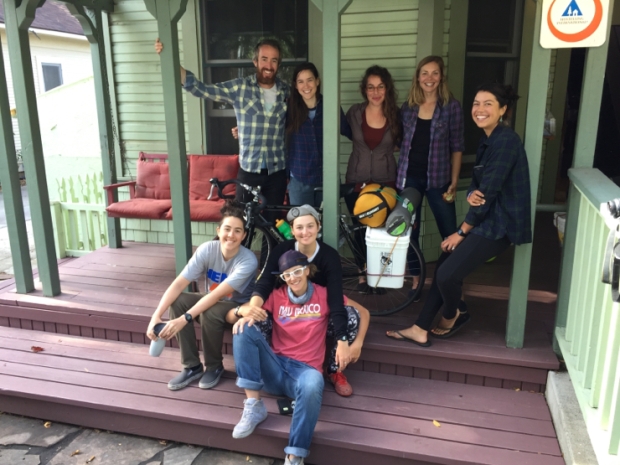 Us with AD and Jackie

OH MY GOSH I nearly forgot to mention Kermit!

Ok, let me set the scene for you. We have just cycled through the home of the artichoke. Artichokes are not my vegetable of choice so it wasn’t on purpose, it was more our route sent us through the town of Castroville and it wasn’t until we were there that we realised the artichoke connection. Anyway, here we are cycling through a field full of sprouts (I’m now wondering if the next town is the home of sprouts, also not my vegetable of choice) and this crazy guy leaps into the road in front of us and starts waving frantically.

‘where are you guys heading?’ 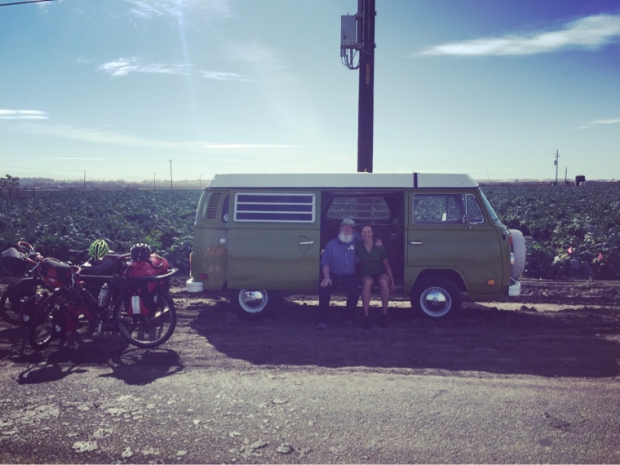 Kermit and a happy Loz

It was the ‘food’ that got my attention. I pull on the brakes to see a skinny looking version of Father Christmas wearing a green frog baseball cap standing in front of me. After a few awkward introductories we learn that this is Paul (aka Kermit) and he is a ‘Road Angel’. A long story short is that Kermit is a retired bicycle tourist who experienced so much good will on the road during this adventures that he now dedicates every Tuesday between 10:30 – 14:30 to giving back some of that good will. He has a pea green VW camper van adorned with Kermit the frog memorabilia and pulls over cycle tourists to help out. He has everything, spare tubes, tools, water, food, maps, directions to campsites, homemade cookies and a ‘fun meter’. He was just one of the coolest guys I had ever met, plus he gave me a fun meter to keep. Kermit put me in such an incredible mood I even made a little video about it here…

The take home message from today. If you ever loose your faith in humanity – go bicycle touring!

*A previous Batcar tourist spotted a man wearing only a sock in the Castro district.