It would be fair to say that before I set foot into the USA on this trip I was somewhat sceptical about Americans. My only prior experience of being in the country was a family trip to Disney World Florida some 15 years ago, which I don’t think counts. Their culture is such that often when an American comes to England they stick out like a sore thumb and you can usually hear them from a mile away, which as we know being moody Brits, is terribly embarrassing for them.

I could not have been more wrong about them.

The last part of our trip from Santa Barbara down to San Diego has once again blown us away at just how wonderful and hospitable Americans can be towards a couple of stinky bicycle tourers.

First up we roll into Santa Barbara with plans to find a coffee shop to hide from the sun for a couple of hours and do some admin. In usual Herb fashion we need to find THE BEST coffee shop in town. After some procrastinating we finally roll into Handlebar, which luckily for Herbie’s sake was not at the top of a hill or 10k in the wrong direction.

We quickly knew we were on to a winner and we could happily park our bottoms for a few hours getting high on caffeine. As usual the bikes were attracting a bit of attention so I didn’t think too much about it when I started chatting to a guy called Aaron outside the shop. Very quickly it transpired that he was a bit of a legend compared to us mere mortals, aka used to ride for T.Mobile in a professional cyclist kind of way. After some awful bike chat on my part I also learn Aaron is the owner of Handlebar and before I know it he has invited Herb and I to come stay with him and his girlfriend Kim (also a cycling legend, Team USA!). Aaron and Kim completely open their home to us, they let us stay for as long as we wanted and treated us like family. After a couple of days when we finally decided to drag ourselves away south we left feeling like old friends who we will definitely be meeting again.

From Santa Barbara it takes us a couple of days to get to LA. We roll in through Malibu and before we know it have prime spots watching the beautiful people of muscle beach. We sit in the sunshine eating carbohydrates while they throw us dirty looks munching on protein shakes in between sets (or something like that). We planned to stay in LA for a few days, mainly because Herbie was heading to Chicago for 24 hours. Something to do with a rugby match, a free ticket, pints and some good friends. Ireland won. Then with the election looming we stayed for another two days to be in the middle of the madness, and madness it really was. Cycling into downtown LA from the coast took us through all the sights, Compton was a highlight. Seriously though, LA is such a sprawling mess of suburbia, pockets of it were great but I’m not sure it’ll be somewhere I’ll be rushing back to anytime too soon. 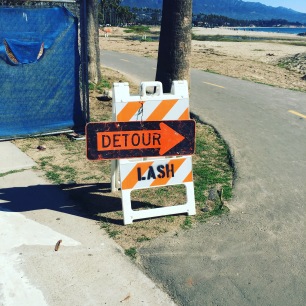 Eventually leaving LA with a new President our cycle took us into Orange County. Wow this really is where all the beautiful people live. Everything is stunning, the beaches, the quaint towns, cars, dogs, people. Everything groomed to within an inch of its life. We felt very out of place as we hauled our sweaty backsides along the rolling coastline, even the people out jogging seemed to be floating around, sweat free as if they were in some sort of paradise advert. It was beautiful, but without a good wash, some new clothes and lots of botox – we just weren’t going to fit in.

By this point we were trying to slow our journey down as Herbie’s old work colleagues were due in town for the weekend and it would good to see some familiar faces before we headed over the boarder. We were struggling to find accommodation in San Diego so headed for the last hiker biker campsite available. Rolling in we met three guys who were on a mini adventure / lads tour. A short overnight bike trip down the coast to make the most of the bank holiday*. Tim, Jeff & Eric turned out to be programmers who used to work together, being serious by day and bike / beer enthusiasts by night. When Tim first mentioned one of his water bottles was filled with vodka I didn’t believe him. It turned out Tim wasn’t a liar and we knew we were on to a winner. We spent the night hearing tales of how Eric lost 130lbs and fired Jeff (I’m not sure in what order that happened however those are the facts) and teaching Tim how to light a $1 BBQ. They gifted me a mallet to help put the tent up, it’s actually really lightweight however Herbie refuses to carry it. This is fine by me because now if he pisses me off, I have a mallet.

As I was saying, finding cheap accommodation in San Diego so we could drag our heels for a few days was looking increasingly dismal. It was as a bit of a last resort we decided to contact John. Like the start of all good stories on this trip so far we had met John outside a supermarket a couple of days previously. We had a lovely brief chat and he mentioned if we were stuck for accommodation he had a boat in San Diego we could crash on and gave us his contact details. Believe it or not we’re still not great at calling in favours so hadn’t initially thought too much about it, however we were now stuck for two days with nowhere to sleep so we sent John a little message asking if he was serious about the boat. He was. John, like so many people we have met went so far above and beyond it was incredible. He met us on Shelter Island, showed us around the boat including a fridge full of beers, showed us to the spa (yes the spa!), then said his farewells and left us with our jaws dropped not quite believing what had just happened. 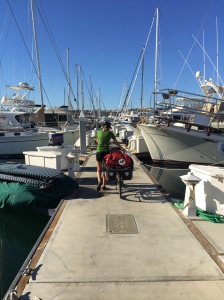 This kind of trip is so many different things to different people. The scenery, cycling, weather have all been pretty much incredible however for us the USA had been 100% about the amazing people we have met. From mostly hanging around outside supermarkets we have met intrepid global travellers, been invited into peoples homes, offered food, offered money, heard stories from pensioners at Burning Man festival, been given short stories to read and acquired so much invaluable advice. Before we came to the US I kept saying I wanted to meet some ‘real Americans’, in my head these were Dolly Parton and John Wayne caricatures with deep south accents, probably wearing checked shirts, driving pick up trucks and not a clue that Europe is in fact a continent and not a country. What has actually happened is I have met an insanely broard range of people from all walks of life, different ages, backgrounds and beliefs. The one thing ‘real Americans’ have in common is their welcomeness and generosity, especially if you meet them outside a supermarket.

USA, I want to give you a great big kiss goodbye. I’ll be back…

*11th November is a Veterans bank holiday in USA.

One thought on “The last of USA”