There are three overnight ferries a week from La Paz in Baja to Mazatlan on the mainland. So as we boarded it was with not so much surprise that seven cyclists turned up. We were ushered on last into the cargo hold next to all the trucks. Most passengers opt to have a cabin for the crossing however as this costs extra, also unsurprisingly we had all opted to take our sleeping bags and our chances in the main lounge. It was a great chance to catch up with Fransi and Jonas from ‘tales on tyres’ as we’d been chatting on social media for a few weeks but never actually met. They had tackled Baja ‘off road’ via the great divide route and as we were ‘on road’ our paths hadn’t crossed. Sleeping on the floor of a ferry lounge ended up being much better than expected, something to do with the gentle rocking and sound of the engines. It was one of the best nights sleep we’d had for ages.

As we arrived in ‘proper’ Mexico we teamed up with Ryan and Kirsten to tackle the route south. They had scouted one of the MANY ‘Santa Rosilia’ ‘Rosaria’ Rosarita’ ‘Santa Rosarita’ ‘Santa Rosa’ named towns which seems to pop up every 20miles throughout Mexico making navigating an occasional nightmare. It was a simple enough day following the 15 or 15D (tollroad). Loz being typical Loz – was at the front, head down and missed the turn off to the toll road, we were now stuck with the smaller 15. You may thinking not taking the toll road was a good idea, but I’d liken it to taking a busy 60mph A road verses the M6 toll. The A road is much more beautiful and passes through small villages, but it’s narrow and full of everything from trucks, busses, motorbikes and goats. The toll road is a lot quieter with a large hard shoulder and less hills. The toll road staff are again extremely welcoming to us and let us cycle on it for two days, even though there is an abundance of ‘no cycling’ signs. The downside to the toll road and the no villages, is our lunch spots consisted of next to an emergency telephone box and under a bridge. Not the most picturesque, but hey, playing ‘dodge the truck’ isn’t always worth a pretty village.

We have been warned not to ‘free camp’ in mainland Mexico. It’s a bit of a toughie because so far the Mexicans have been nothing but 100% welcoming to us and I feel completely safe. I also think I would feel completely happy camping behind a restaurant for the night like we did many times in Baja. Herbie on the other hand is overly more cautious and more concerned for my safety than I am. So ever since being on the mainland we have either stayed in cheap hotels or camped in designated campgrounds. The plus side of cycling with Ryan and Kirstin was that a hotel room for four people is the same price as a hotel room for two (two double beds). Paying £7.50 per couple for a room with a shower and occasionally air conditioning is definitely worth it. The downside is having to arrange our days cycling around where we can sleep, can we push and do a 90mile day or do we have to stop at 45 when you feel you can do a bit more but don’t want to end up stuck somewhere in the dark. First world problems I guess. 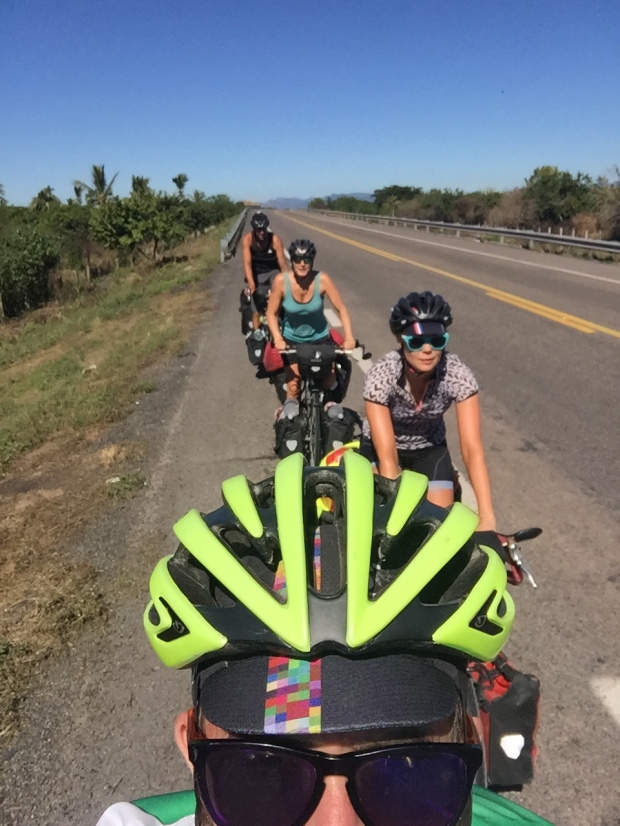 We decided to take a day off the bike and head into San Blas, a quirky little town on the coast. We rented a two bedroom airbnb to treat ourselves and have use of an actual kitchen. Oh the joys of having two simultaneous cooking rings!!! It was quaint however the bathroom was behind a badly fitted curtain – good job we’d become pretty close in the last few days. We enjoyed a day off the bike, sleeping in, eating a massive breakfast, drinking lots of coffee and generally being tourists around the pretty beach town. Being with Ryan and Kirstin also meant that the boys could be boys and the girls could wander around town looking at the shops and market guilt free.

All was well until we were leaving the next morning, a lady approached us as we were buying fresh bread. She was working for the Peace Corps and immediately started warning us of the dangers of San Blas, telling us about all the robberies recently and we should be really careful. Luckily we were on our way out but it did put a bit of a dampener on our visit. Having been on the mainland for five days and feeling completely safe it was a bit of a shock, however it’s never bad to be reminded to be extra vigilant. Whenever we have meet ex pats over here we have always asked about the safety. We haven’t met anybody over here who has ever run into any trouble, although everyone has always ‘heard’ of something going on somewhere between somebody. The story always seem to be the same. Don’t do anything silly. Try not to get caught in the middle of anything. Respect the locals. Smile. So far, so good – and long may it continue.

Being on the bike so far in mainland has been HOT. Normally I’m a complete sun lover and will happily lie in it for days however I’ve realised that cycling in the heat is not for Loz. I sweat profusely, feel like I have as much energy as a sloth and to feel sweat trickling down you back and into your bottom is not a particularly nice feeling. My handlebars get so slippery from sweat, my sunglasses constantly fall down my nose and cycling shorts end up feeling like you are wearing a wet nappy. Not sure why I just typed all that, but I just thought I’d give you an idea before you start being too jealous of the blue skies.

It’s beautiful but so HOT!

I’ll pull you back for that unfortunate metal image and get the jealousy juices flowing again by saying we spent the next four days with Ryan and Kirstin beach hopping down the coast towards Puerto Vallarta. The sea is warm, the beaches are beautiful and apart from the pedalling it was like being on holidays with friends. It’s amazing how spending 24hours in a strangers company for a few days can make you feel like you’ve known each other for years. Kirstin is from Munich and started her cycle up in Alaska, on her own with a view of also making it to Ushuaia. While in Alaska she ended up camping one night with some other cyclists and some road construction workers, Ryan was the boss. They hit it off immediately and what followed was Ryan chasing Kirstin around Alaska whenever he could for the next few weeks. Being able to get six months off work he bought a bike and as soon as he could set off to catch up with Kirstin. He managed to join her again in Port Angeles and they’ve been pedalling together ever since. Really cool couple with a pretty amazing story! We finally said a goodbye to them in Puerto Vallarta where we all take different paths for Christmas, Herb and I have to get to Guadalajara in order to fly back to Tijuana and meet some of Herbie’s family. We now have three massive days of mountains ahead of us.

Yesterday. I’ll give you the stats first.

It was a pretty gnarly day on the bike, I ended with very sore legs but I’m equally as proud that I did it. Starting out the day I already felt pretty sluggish, we had a couple of hours on flat roads before we got to the hills and I felt like I was cycling with my brakes on. I stopped twice, once to check my brakes weren’t rubbing and secondly to make sure my tyres weren’t flat, neither were an issue, it was just me. Herbie offered numerous times to take more weight but obviously me being a stubborn ass I declined on every occasion. It was probably Herb just getting annoyed at how slow I was being more than chivalry?* Not believing google (as it’s always wrong) Herb checked out some of the stats on starva pre setting off. For the ‘virgin’ climb it was 39km and 1643m of climbing with an average gradient of 4% which didn’t sound too (everything in perspective) horrendous. Herb had also spoken to the guy in the bike shop who said he had led a group on the same route and it had taken them 9hours. Mentally preparing myself for 9hours of misery definitely helped as a normal bike day is about 5hours. Starting the day it was hot, steep and sweaty but not completely disgusting. Sure I was spending a lot of time in my lowest gear feeling awful but at least I felt like I was moving forward. After about five hours we passed the 38km to go sign. I’d spoken to my dad earlier in the day and he said he was going to join me with a 40km cycle round Buckinghamshire. Seeing this sign I mentally checked my dad in, also knowing full well that just a few months ago his ironman bike had taken him 7:30hrs – then he ran a marathon. Almost immediately the road kicked up and it took me an hour to cover the next 7km, the final kms of the climb averaged about 11% and I wobbled up occasionally clocking 2.5mph on my speedo. (I could have been going slower but I don’t think it can read any lower) We finally reached the summit after about seven hours of riding, apart from the bike shop guy had also mentioned there were two more climbs afterwards. We stopped briefly to change out of our sweaty tops and add layers for the decent, aware that we only had a couple of hours more daylight. A brief decent then up another thankfully more forgiving climb. Then came the massive decent into the most beautiful valley I’ve seen in months. Sierra Madre is away from the touristy coast and is a stunning piece of farmland. There are beautiful churches, manicured fields, healthy cattle and even stone walls! The road was slightly downhill and we zoomed along gawping at the scenery but dreading which mountain we had to climb back up. The road continued and when we reached the 5km to go sign we realised there was no more climbing. The clock ticked over 8hrs pedalling and Herb finally let me into a secret. The guy in the bike shop had taken eleven hours to do the ride, not nine. Having more faith in my legs than I did, he lied because if I’d have known it took eleven there was probably no way I would have committed to the full distance.

*Absolutely not, Herb is a true gentleman. 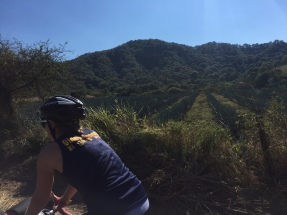 One thought on “Mainland Mexico”