After one particularly hard days cycling (have I mentioned that all the days are hard?!) we pulled into the only campsite in Strasbourg to find it was full. Some campsites are pretty lax about their attitude to tents and as long as you hand over some cash they are happy for you to pitch wherever you find a space. Unfortunately this was no such campsite.

The poor lady behind the desk suggested that next time I should book and the next nearest campsite was only 25km away. I did my best impression of a rational human being and pleaded with her for the wifi code.

As we were sat weighing up our options a few other cycle tourers also pulled in to be told the same story. Most impressive was a Spanish guy called Juan with his two children Claudia and Ivan. The children looked about nine years old and the three of them were on a Rhine cycling holiday. Claudia and Ivan, on mountain bikes each carrying their own panniers and camping mats did not have a care in the world. They were happy, playing, full of energy and too busy catching spiders to be concerned about being turned away from a bed for the night. 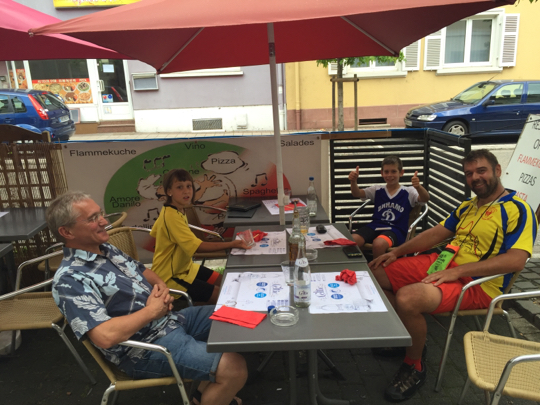 After a few minutes of using the site wifi we decided against the extra 25km and booked into a cheap studio apartment for the night. Luckily it really was cheap and it meant we could still cook our own food with the added bonus of sleeping in a bed.

The next morning after a quick coffee stop amid 4875 American & Chinese tourists we were back on our way headed North in search of IronMan country. Quite quickly we crossed paths with one of the also turned away cycle tourers from the night before. He turned out to be Aussie Luke from Adelaide and was also heading North along the Rhine. It didn’t take long to figure out Luke was great company and also pretty happy to pair up with us despite numerous warnings of my mood swings and daily arguments, he agreed to spend the next few days cycling together. 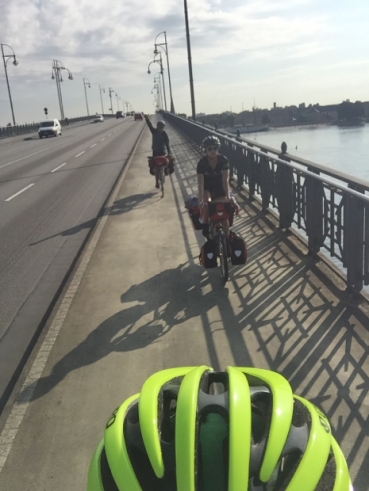 That first day we cycled just over 100km but couldn’t for the life of us find the campsite we were heading for. It was definitely on the map but when we turned up it looked more like a shanty town commune. There were no tents or camper vans, only very old chalets and static caravans arranged in a very overgrown grid system with lots of dogs running around. There was one sort of ‘kiosk’ which was full of Germans drinking beer and no sign of any reception or organisation about the whole thing.

Obviously, my two knights in shining armour sent me over with instructions to check it out and to come back with beer. Nervously I went up to the kiosk and in my very best diabolical attempt at German tired to ask for camping. Luckily ‘Do you speak English?’ was the response and I nearly said a ‘Hail Mary’ out of relief. It turned out that Marina who runs the site used to work on an American army base and spoke perfect, well American English. Officially tents were not allowed on the permanent site but as long as we only stayed one night, didn’t make a mess and bought some beer she was more than happy to let us stay for free. The beer was €2 and a 1.1l bottle of very good local Reisling was €3. Marina was a fantastic host, she was witty, welcoming and a wonderful cook. If anybody finds themselves close to Sondernheim CampingPlatz we would highly recommend paying them a visit. In our whole tour so far this was the best hospitality we have had from complete strangers. The other campers despite the language barrier were hugely welcoming and we shared an evening of beer, laughter and getting bitten by mosquitoes. 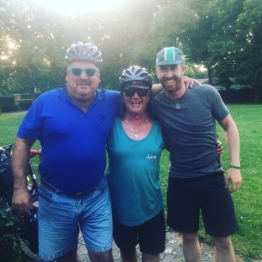 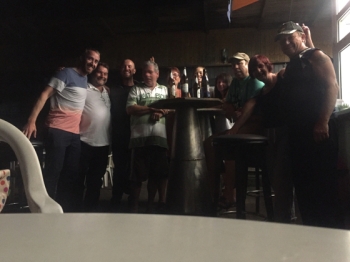 The next morning we were up early and to save on whinging the short story is we pulled out a massive 140km day. Rule #5 was in force and Luke did a great job of diffusing any spats that were likely to happen between Herbie and I. It was then on to Mainz, Koblenz and Cologne. Each day over 100km and we made up great time, often as a very un-aerodynamic chaingang of steel bikes, panniers and solar panels. Our days spent with Luke meant Loz was on best behaviour and we’ve done our best to convince him that a little cycle across the Americas would be a great holiday…

Alas, our time spent together was to come to an end as we needed to swing a left to Maastricht and Luke continued on his way North. We celebrated in the only way we knew how and spent the evening drinking beer and eating schnitzel followed with a morning breakfast of smashed avocado and great coffee. 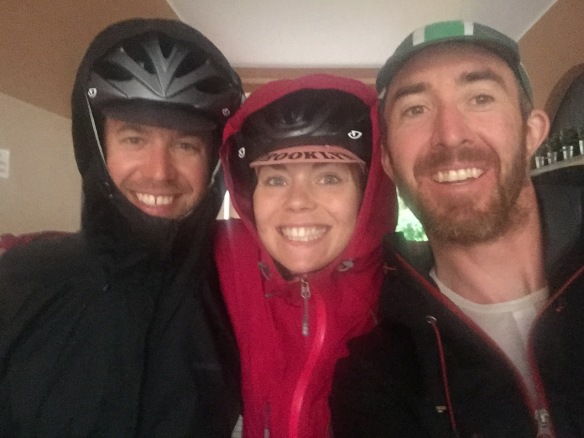 Luke, Loz & Herb as we head our separate ways into the rain

Herb and I were on our own again…. 100+km of heading East straight into relentless headwinds finally paid off as that evening we were met by the man of the moment. Loz’s Dad Steven who is competing in his second IronMan this weekend in Maastricht. We’re giving the cycling a rest for a few days as we turn our full attention to IronMan cheerleading, or what the ‘cool kids’ call, being an IronFan….

p.s Just incase it wasn’t obvious, ‘The Whinging Pom’ is Loz and Luke’s suggestion of what the blog should be called.